Cell death has been divided into two main types: PCD (Programmed Cell Death), in which the cell plays an active role, and Necrotic (passive) cell death. PCD is a form of cell death in which the cell plays an active role in its own demise. In contrast, Necrosis is characterized by swelling of the cell and its organelles; that results in disruption of the cell membrane and cell lysis. The PCD observed during development and tissue homeostasis has been classified morphologically into three main types: type 1, also known as nuclear or apoptotic; type 2 or Autophagic; and type 3, also referred to as Cytoplasmic. Apoptosis is the best characterized type of PCD, in which the cells display membrane blebbing, flipping of Phosphatidylserine in the plasma membrane, nuclear[..]

Protein kinases of the PAK (p21-Activated Kinase) family are found in all eukaryotic species. This family is defined by sequence similarity in the kinase domains and by the occurrence of a domain that can be bound by CDC42, a p21 GTPase of the Ras superfamily. Saccharomyces cerevisiae cells contain three members of this family, Ste20, Cla4, and Skm1, each of which performs a distinct set of cellular roles. Like all members of the PAK family, these three kinases contain an N-terminal PBD and a C-terminal protein kinase domain; however, Cla4 and Skm1 also contain a PH domain N-terminal to the PBD and, together with PAK2 from Schizosaccharomyces pombe, form a distinct subfamily (Ref.1).The Ste20 group kinases are further divided into the PAK and GCK (Germinal Center[..]

The ability of a cell to respond specifically to various external and internal signals plays an essential role in regulating gene expression, differentiation, and cell death. Most often, the cellular responses to various stimuli involve transduction of signals received by specific receptors to defined targets that elicit specific responses in distinct cellular compartments. The high-mobility group box-1 (HMGB1) protein,also known as high-mobility group 1 (HMG-1) and amphoterin, is a highly conserved, abundant non-histone nuclear protein expressed in almost all eukaryotic cells. As a nuclear molecule, HMGB1 regulates transcription, repair and recombination through exerting effects on chromosomal architecture. As HMGB1 does not bind tightly to DNA, including promoter[..]

Huntington disease is an Autosomally Dominant degenerative disorder resulting from expansion (>37 units) of a polyglutamine repeats in Huntingtin, a 350-kDa protein of unknown function. The polyglutamine repeat is localized in the N-terminal region of Huntingtin and is encoded by exon1 of the HD or Htt (Huntingtin) gene. Huntington disease is characterized by uncontrolled movements, personality changes, and dementia and causes the death of patients within 10–20 years after the appearance of the first symptoms. Huntingtin is highly expressed in the brain, and particularly enriched in Cerebral Cortex and Striatum. It is a cytoplasmic protein that is essential during development for Gastrulation and Neurogenesis, and it is important for Neuronal survival in the[..]

HD (Huntington's disease) is an autosomal dominant monogenic neurodegenerative disorder caused by an expanded CAG repeat in the HTT (huntingtin) gene, resulting in a mHTT (mutant HTT) protein carrying an expanded polyQ (polyglutamine) repeat on exon1. HD is characterised primarily by motor disturbances, but is commonly accompanied by cognitive impairments and psychiatric abnormalities. Progressive striatal neurodegeneration is a hallmark of HD that can be identified prior to motor symptom onset, however there is evidence for widespread neuropathology in HD brain, including degeneration of cortical and subcortical structures. mHTT neuronal intranuclear inclusions (NIIs) can be found throughout vulnerable neuronal populations in HD brain (Ref.1).Huntingtin can also[..]

Epithelial continuity depends on a family of small, yet abundant, secreted proteins the TFFs (Trefoil Factors). TFFs are considered as 'Rapid Response' agents to mucosal injury; with up-regulation of expression in the early stages of mucosal repair. These peptides are involved in mucosal maintenance and repair through motogenic and anti-apoptotic activities. They also function as scatter factors, pro-invasive and angiogenic agents. TFFs are connected with multiple oncogenic pathways. As a consequence, the TFF signaling pathways serve as potential targets in the control of chronic inflammation and progression of human solid tumors (Ref.1 & 2). The TFFs constitute a family of small regulatory gastric peptides consisting of three members, TFF1/pS2[..]

CNTF (Ciliary Neurotrophic Factor) is a protein expressed in glial cells, which stimulates gene expression and cell survival and differentiation in a variety of neuronal cell populations and acts as a lesion factor involved in the prevention of nerve degeneration after injury. It is a member of the IL6ST (130-kDa Glycoprotein) cytokine family along with structurally related hemato- and neuropoietic cytokines IL-6 (Interleukin-6), IL-11 (Interleukin-11), LIF (Leukemia Inhibitory Factor), OSM (OncoSOAT1in M), CT-1 (Cardiotrophin-1), Leptin and CLC (Cardiotrophin-Like Cytokine). The actions of CNTF are mediated, in part by CNTFR-Alpha (CNTF-specific Receptor). Upon translation, the C-terminus of CNTFR-Alpha is cleaved. Mature CNTFR-Alpha has no transmembrane or cytosolic[..]

Muscular dystrophy is a genetically heterogeneous group of disorders characterized by progressive weakness and degeneration of the skeletal or voluntary muscles which control movement. This group of diseases has three features in common: they are hereditary, they are progressive and each causes a characteristic, selective pattern of weakness. Some forms of MD first appear in infancy or childhood, but others may not appear until middle age or later. Although the actual cause of this disorder is unknown, it is known that a gene defect is responsible for the onset. Even though females are known to carry the defective gene they remain unaffected. The recessive gene that is responsible is carried on the X-chromosome and while females who are carriers have a normal[..]

The development of the NMJ (Neuromuscular Junction) is triggered by agrin, a signaling factor that is deposited by the nerve terminal at the site of contact with the muscle cell. Motor neuron-derived agrin induces many aspects of synaptic differentiation and is required for the postsynaptic localization of many synapse-specific basal lamina, transmembrane, and cytoplasmic proteins. In addition, agrin is sufficient to induce aggregation of these synaptic proteins in muscle cells in vitro, or at ectopic sites on muscle fibers in vivo. Most notably, agrin induces a rapid aggregation of AChR (Acetylcholine Receptors), initially through a redistribution of preexisting receptors in the muscle membrane. This agrin-induced clustering of the neurotransmitter receptor allows[..]

Gastrin is the primary hormone that induces gastric acid secretion. In humans, the gene encoding for gastrin is located on chromosome 17q21. This hormone is produced by the G-cells of the antrum of stomach as preprogastrin, which comprises of 101 amino acids and is cleaved between Ala-21 and Ser-22 to yield progastrin.Gastrin interacts with the membrane-bound G-protein coupled cholecystokinin receptor group consisting of CCKAR(Cholecystokinin A receptor) and CCKBR(Cholecystokinin B receptor). CCKAR possesses high affinity for cholecystokinin and has a negligible affinity for gastrin. However, CCKBR has a high affinity for gastrin and their carboxyl amidated analogues. CCKBR is expressed in the brain, smooth muscle cells, and parietal cells.CCKBR is a member of the[..] 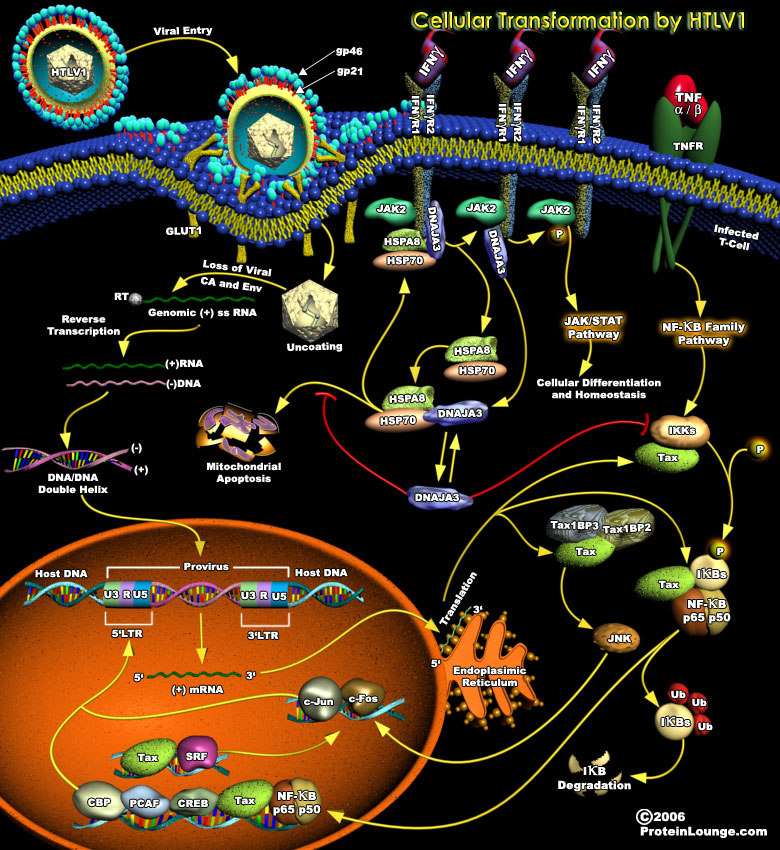 The HTLV-1(human T-lymphotropic virus type 1) is the etiological agent of ATL(adult T-cell leukemia). HTLV-1 Tax has been shown to have a prosurvival role in infected T cells by enhancing expression of the BCL-2 family of antiapoptotic proteins.After intensive studies, evidence has shown that the viral protein Tax has a key role in promoting viral spread and it is also one of the essential proteins involved in oncogenesis through multiple mechanisms, for example, promoting G1–S progression, enhancing the PI3K-AKT signaling pathway, inducing DNA hyper-replication, decreasing DNA repair, constitutive activation of NF-KappaB and suppression of apoptosis. Its ability to modulate the expression and function of many cellular genes is reasoned to be a major contributory[..]