ADRs (Adrenergic Receptors) are expressed on virtually every cell type in the body and are the receptors for Adrenaline, Epinephrine and Norepinephrine within the Sympathetic Nervous System. They serve critical roles in maintaining homeostasis in normal physiologic settings as well as pathologic states. These receptors are also targets for therapeutically administered agonists and antagonists (Ref.1). ADRs are members of the super family of cell surface receptors that carry out signaling via GPCR (G-Protein Coupled Receptors) and are divided into nine distinct subtypes: ADR-Alpha1A, ADR-Alpha1B, ADR-Alpha1D, ADR-Alpha2A, ADR-Alpha2B, ADR-Alpha2C, ADR-Beta1, ADR-Beta2 and ADR-Beta3. ADR-Alpha2 is implicated in diverse physiological functions particularly of the[..]

The rate and strength of beating of the heart is under the reciprocal control of the Adrenergic (sympathetic) and Cholinergic (parasympathetic) systems. Increased strength (inotropy) in cardiac beating in response to hormones like the blood-borne Epinephrine or to neurally delivered Norepinephrine is mediated by ADR-Beta (Beta-Adrenergic Receptors) , which are members of the superfamily of cell surface receptors that carry out signaling via coupling to G-proteins (Guanine nucleotide binding proteins)(Ref.1). ADR forms the interface between the endogenous Catecholamines, Adrenaline, Epinephrine and Norepinephrine and a wide array of target cells in the body to mediate the biological effects of the Sympathetic Nervous System. They serve critical roles in maintaining[..] 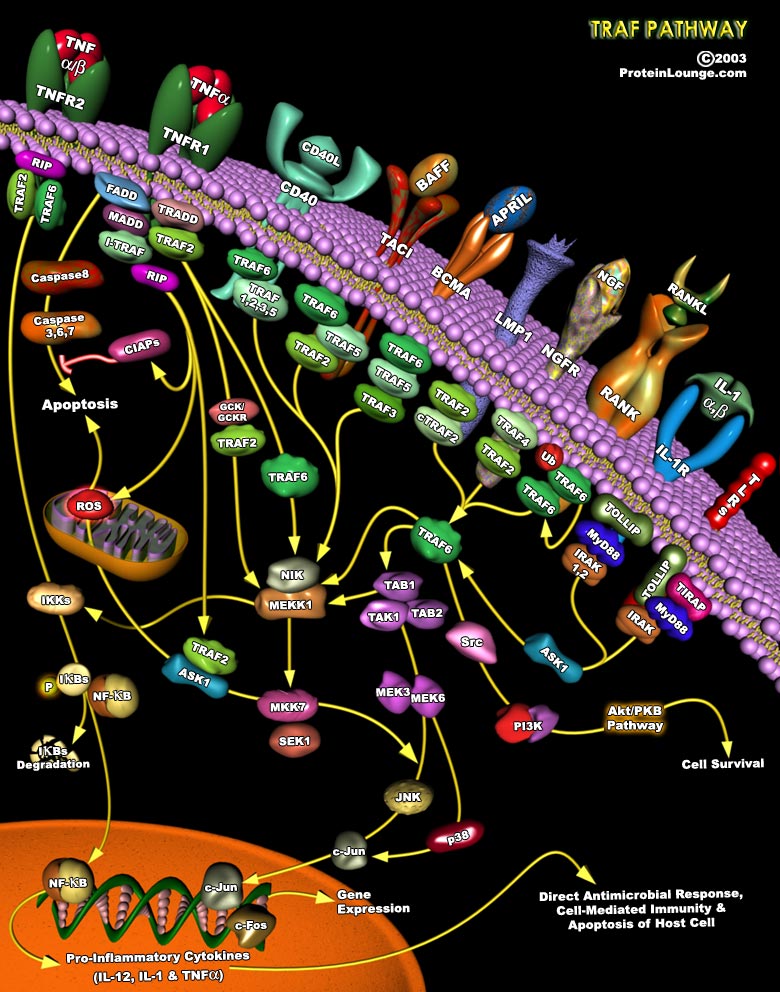 The structural and metabolic integrity of bone is maintained through the dynamic process of bone remodeling those results from the coordinate action of bone resorption and the formation of new bone by osteoblasts. Regulation of bone remodeling occurs through multiple mechanisms that ultimately converge on the interaction of osteoclasts or their precursors with osteoblasts and bone marrow stromal cells. Two key factors supplied by the stromal environment are CSF1 (Colony-Stimulating Factor-1) and the TNF family member, RANKL (Receptor Activator of Nuclear Factor-KappaB Ligand, also called TRANCE, ODF, OPGL). Signaling through RANK is essential for the differentiation and activation of osteoclasts, the cell principally responsible for bone resorption. RANK provokes[..]

IL-2 (Interleukin-2) is a T-Cell-derived cytokine important in the regulation of growth and differentiation of T-Cells, B-Cells, natural killer cells, glioma cells, and cells of the monocyte lineage after specifically interacting with its receptors. Human IL-2 is a 133-amino acid polypeptide with a molecular mass of 15-18 kDa. IL-2 signaling is mediated by a multichain receptor complex consisting of an alpha (CD25), beta (CD122) and gamma (CD132) chain. The IL-2R (IL-2 Receptor) alpha subunit primarily increases the affinity of ligand binding and is not known to contain a signaling domain, whereas the beta and gamma subunits participate in both ligand binding and signal transduction. The IL-2R signaling system proceeds through at least three different pathways, which[..]

Engagement of integrin receptors with extracellular ligands gives rise to the formation of complex multi-protein structures that link the ECM (Extracellular Matrix) to the cytoplasmic actin cytoskeleton and signaling proteins including Talin, Alpha-actinin, Vinculin, Zyxin, Paxillin and FAK (Focal Adhesion Kinase). These adhesive complexes are dynamic, often heterogeneous structures, varying in size and organization, and signaling through these complexes and focal adhesions have been implicated in the regulation of a number of key cellular processes, including growth factor induced mitogenic signals, cell survival, cell proliferation and migration, cell locomotion and regulation of cell cycle (Ref.1). FAK is a non-receptor cytosolic PTK with a central catalytic[..]

Interleukin-22 (IL-22) is a member of the IL-10 related cytokine family which includes IL-10, IL-19, IL-20, IL-22, IL-24, and IL-26.  It is generally secreted by Th17 and Th22 cells. Other immune cells like mast cells, NKT cells, natural killer22 (NK22) cells, lymphoid tissue inducer (LTi) and LTi-like cells also produce IL22. It exerts its effect on non-hematopoietic stromal cells including epithelial cells, keratinocytes, and hepatocytes.IL-22 is important for the host defense against extracellular pathogens, at mucosal surfaces as well as in tissue repair and wound healing (Ref. 1 and 2). IL 22 signals through a type 2 cytokine receptor that comprised of a heterodimeric complex of IL22RA1 and IL-10R2 (IL-10Rb). A soluble IL-22R called IL-22-binding protein[..]

IL4 is a multifunctional cytokine produced by TH2 type helper T cells, fibroblasts, mast cells, basophils, eosinophils, adipose, and a wide range of epithelial cells. IL4 acts on a broad range of cells, including keratinocytes, in which it induces IL6 production.   IL4 cognate receptors are of two types: I IL4R (IL4RI) and type II IL4R (IL4RII). IL4RI are mostly present on immune cells and forms heterodimer with the common gamma-chain subunits. IL4RII on the other hand is found on the surface of non-hematopoietic cells and is composed of IL4Ralpha and the IL13Ralpha1 subunits. IL4 activates tyrosine kinases JAK1/3 and TYK2, which are recruited on the transmembrane domain of IL4RII and mediate its phosphorylation, leading to the activation of PI3K/AKT, MAPK,[..]

CTLs (Cytotoxic T Lymphocytes) and NK (Natural Killer) cells are the key immune effectors that eradicate infected cells or tumors. To destroy these targets, CTLs and NK cells mostly use the granule exocytosis pathway, which releases perforin and Granzymes from cytolytic granules into the immunological synapse formed with the target. Granzyme-A and Granzyme-B, the most abundant Granzymes, are delivered to the target cell cytosol through perforin and independently induce cell death. Granzyme-B enters the target-cell cytosol by a poorly understood mechanism involving perforin. Granzyme-B induces apoptosis through Caspase-dependent and Caspase-independent mechanisms (Ref.1). Granzyme-B is unique among serine proteases because, like cysteine protease Caspases, it[..]

IL6 (Interleukin-6) is a pleiotropic cytokine that not only affects the immune system, but also acts in other biological systems and many physiological events in various organs including the inflammation, hematopoiesis, and oncogenesis by regulating cell growth, gene activation, proliferation, survival, and differentiation. This protein signals through a receptor composed of two different subunits, an alpha subunit that produces ligand specificity and GP (Glycoprotein) 130, a receptor subunit shared in common with other cytokines in the IL-6 family. Binding of IL6 to its receptor initiates cellular events including activation of JAK (Janus Kinase) kinases and activation of RAS-mediated signaling. Activated JAK kinases phosphorylate and activate STAT transcription[..]

IL9 (Interleukin-9) is a pleiotropic cytokine secreted by activated T cells, mainly TH2 and TH9. Other cells like mast cells, Treg cells and TH17, innate lymphoid cells, NKT cells, and dendritic cells can also secrete IL9. IL9 generally play an important role in immune response, its major target include T-cell clones, hematopoietic progenitors, mast cells, B lymphocytes and immature neuronal cell lines.  In addition, it may be involved in tumorigenesis (Ref.1). IL9 is a member of the four-helix cytokine family that signals through the the two chain IL9 receptor that include the IL9RA (IL9–specific alpha chain) and the common gamma chain, that is shared by IL-2, IL-4, IL-7, IL-15 and IL-21 receptors.  IL9R is expressed in membrane-bound and soluble[..]

Insulin is the major hormone controlling critical energy functions such as glucose and lipid metabolism. Insulin elicits a diverse array of biological responses by binding to its specific receptor. The insulin receptor belongs to a subfamily of receptor tyrosine kinases that includes the IGF (Insulin-like Growth Factor) receptor and the IRR (Insulin Receptor-Related Receptor). These receptors are tetrameric proteins consisting of two alpha and two beta subunits that function as allosteric enzymes in which the alpha subunit inhibits the tyrosine kinase activity of the beta subunit. Insulin has diverse effects on cells including stimulation of glucose transport, gene expression and alterations of cell morphology. The hormone mediates these effects by activation of[..]