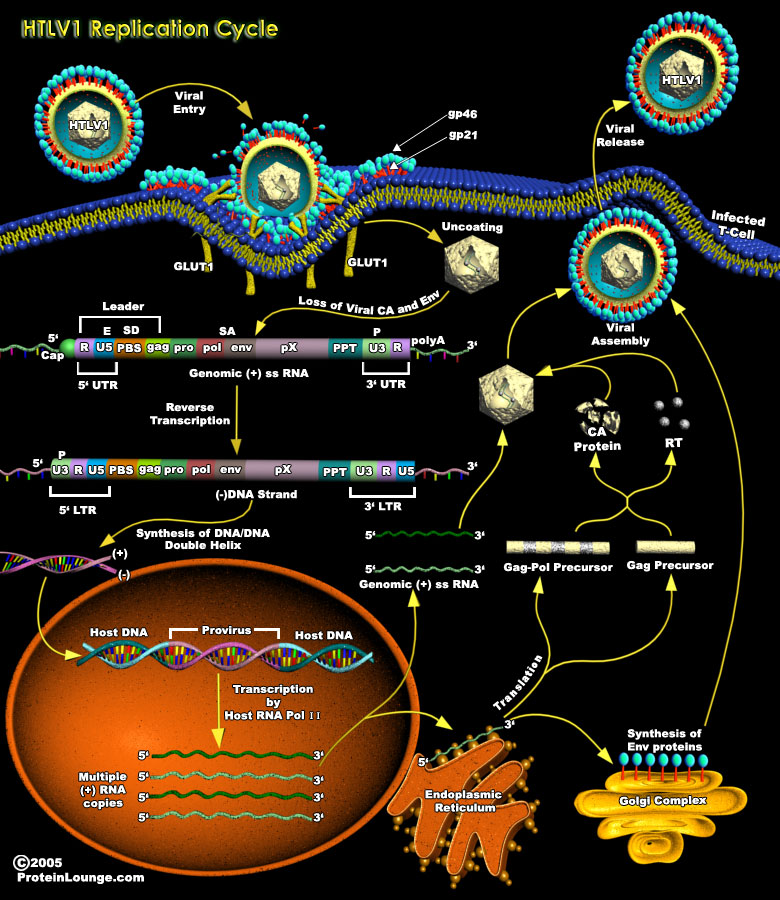 The retroviral life cycle begins in the nucleus of an infected cell. At this stage of the life cycle the retroviral genome is a DNA element integrated into and covalently attached to the DNA of the host cell. Deltaretroviruses are complex viruses characterized by “C”-Type morphology. The most famous examples are the HTLV1 (Human T-Lymphotropic Virus-1), HTLV2 and the BLV (Bovine Leukemia Virus). HTLV1 is associated with a neurologic degenerative disorder known as TSP (Tropical Spastic Paraparesis) or, more commonly with HAM (HTLV1-Associated Myelopathy). HTLV1 spread occurs via semen, needles, breast milk and blood (Ref.1 & 2). There is no present licensed vaccine against HTLV1. Attachment of the virus occurs via SU (Surface Glycoprotein) peplomer.[..]

IL-2 (Interleukin-2) is a biological response modifier (cytokine), which stimulates the growth, proliferation and subsequent differentiation of disease-fighting blood cells, like T-Cells, B-Cells, NK (Natural Killer) cells, monocytes, macrophages, and oligodendrocytes. It is a powerful immunoregulatory lymphokine that was originally described as "T-Cell growth factor" and is secreted primarily by Antigen-activated T-Cells. Human IL-2 is a 133-amino acid polypeptide with a molecular mass of 15-18 kDa. In an autocrine fashion, the Antigen-primed THC (T Helper Cell) secretes IL-2, stimulating itself as well as other neighboring Antigen-primed T-Cells to proliferate (T-Cell activation and proliferation). Growing T-cells in long term culture require IL-2 as a[..]

TREMs (Triggering Receptor Expressed on Myeloid Cells) are a family of recently discovered receptors of the immunoglobulin superfamily, expressed on various cells of the myeloid lineage, which play important roles in innate immune responses, such as to activate inflammatory responses and to contribute to septic shock in response to microbial-mediated infections (Ref.1). During the onset of an infection, the host must launch a rapid innate response to control pathogen proliferation and spread the same until the adaptive response of specific T- and B-Cells has fully developed. This first line of defence is provided by the coordinate action of several effector cell types, including the phagocytes. These cells express a large array of cell-surface receptors, some of which[..]

The Plasmodium Merozoite is an ovoid cell and measures approximately 1.5 micron in length and 1 micron in width. The apical end of the Merozoite is a truncated cone-shaped projection demarcated by the polar rings. At the anterior end of the Merozoite are present three types of membrane-bound organelles, namely, Rhoptries (two prominent pear-shaped, 570 X330 nm), micronemes (ovoid bodies, 100 X40 nm), and dense granules (spheroid vesicles, 140 X120 nm). The contents of these organelles play a role in the binding and entry of the Merozoite into the host cells. Extracellular Merozoites are intrinsically short-lived and must rapidly invade a new host erythrocyte (Ref.1). The Merozoite is surrounded by a trilaminar pellicle that is composed of a plasma membrane and two[..]

CCR5 (Chemokine-CC Motif-Receptor-5) is a member of the chemokine receptor subclass of the GPCR (G-Protein-Coupled Receptor) superfamily. It regulates leukocyte chemotaxis in inflammation and serves as a coreceptor for M-tropic (Macrophage tropic) HIV (Human Immunodeficiency Virus) entry. It serves as a functional receptor for various inflammatory CC-chemokines, including MIP1Alpha (Macrophage Inflammatory Protein-1-Alpha), MIP1Beta (Macrophage Inflammatory Protein-1-Beta), and RANTES (Regulated on Activation Normal T-Expressed and Secreted protein) and is the main coreceptor for M-tropic HIV1 strains. CCR5 is expressed in lymphoid organs such as thymus and spleen, as well as in peripheral blood leukocytes, including macrophages and T-Cells. The extracellular loops and[..]

Efficient ligation of the TCR (T-Cell Receptor) by high-density Antigen can generate a productive T-Cell response and result in cytokine secretion and clonal expansion that is crucial for an optimal immune response. TCR stimulation may provoke different cell responses (proliferation, anergy to subsequent stimuli, cell death) in mature circulating T-Cells (Ref.1). Deregulation of T-Cell function, whether by defect or by excess, may result in dire consequences for us i.e., immunodeficiency and autoimmunity respectively. If the T-Cell response is too great and activation of unstimulated cells and self-responsive cells is not suppressed, then it may give rise to autoimmune disorders or tissue injury. Therefore, regulation of T-Cell activation and maintenance of the T-Cells[..]

PGC1Alpha (Peroxisome Proliferator-Activated Receptor Gamma Coactivator-1-Alpha) is a tissue-specific transcriptional coactivator that enhances the activity of many nuclear receptors and coordinates transcriptional programs important for cellular energy metabolism and overall energy homeostasis (Ref.1). It is a key regulator of cardiac mitochondrial functional capacity and participates in the transduction of physiologic stimuli to energy production in the heart. The expression of the PGC1Alpha gene is upregulated after birth in the heart, before the known increase in mitochondrial biogenesis and switch from glucose to fatty acids as the chief energy substrate. PGC-1Alpha gene expression is activated by short-term fasting, a condition known to increase cardiac[..]

TOB (Transducer of ErbB2), a member of the TOB and BTG (B-cell Translocation Gene) anti-proliferative protein family, negatively regulates the proliferation of Osteoblasts. Bone is formed and resorbed continuously, starting in the embryo and continuing throughout adult life. This process occurring in adult bone is called bone remodeling. Bone remodeling is accomplished by precise coordination of two cell types, Osteoblasts and Osteoclasts. Osteoblasts deposit calcified bone matrix, and Osteoclasts resorb it. Deregulation of bone remodeling leads to metabolic bone disease. Osteoporosis, for example, is characterized by reduced bone mass and it results from an imbalance between bone formation and resorption. Therefore, bone remodeling needs a proper regulatory mechanism.[..]

Acute gastroenteritis is among the most common illnesses of humankind, and its associated morbidity and mortality are greatest among those at the extremes of age, children and the elderly. In developing countries, gastroenteritis is a common cause of death in children that can be linked to a wide variety of pathogens. The mammalian gastrointestinal epithelium is the largest surface area contacting the external environment. It is made up of five major cell types enterocytes, mucus-secreting goblet cells, hormone-secreting enteroendocrine cells, Paneth cells, and tuft cells. Much of the gastroenteritis in children is caused by viruses belonging to four distinct families-Rotaviruses, Caliciviruses, Astroviruses and Adenoviruses. Rotaviruses proliferate in the non-dividing[..]

The sense of taste plays a critical role in the life and nutritional status of humans and other organisms. Human taste perception may be categorized according to four well known and widely accepted descriptors, sweet, bitter, salty, and sour (corresponding to particular taste qualities or modalities), and two more controversial qualities: fat and amino acid taste.Taste is a sensory modality involving the oral perception of food-derived chemicals that stimulate receptor cells within taste buds. Taste principally serves two functions: it enables the evaluation of foods for toxicity and nutrients while helping us decide what to ingest and it prepares the body to metabolize foods once they have been ingested. Taste percepts are elicited by molecules that stimulate the[..]

The sense of taste plays a critical role in the life and nutritional status of humans and other organisms. Human taste perception may be categorized according to four well known and widely accepted descriptors, sweet, bitter, salty, and sour (corresponding to particular taste qualities or modalities), and two more controversial qualities: fat and amino acid taste. In addition to these basic tastes, the taste buds also detect a meat-like taste known as umami in protein-rich food. The food chemicals that produce tastes set off different reactions from the taste buds with a main goal of sending signals along nerve fibers to the brain for interpretation. The perception of bitter taste is essential for its protective value, enabling humans to avoid potentially deadly plant[..]