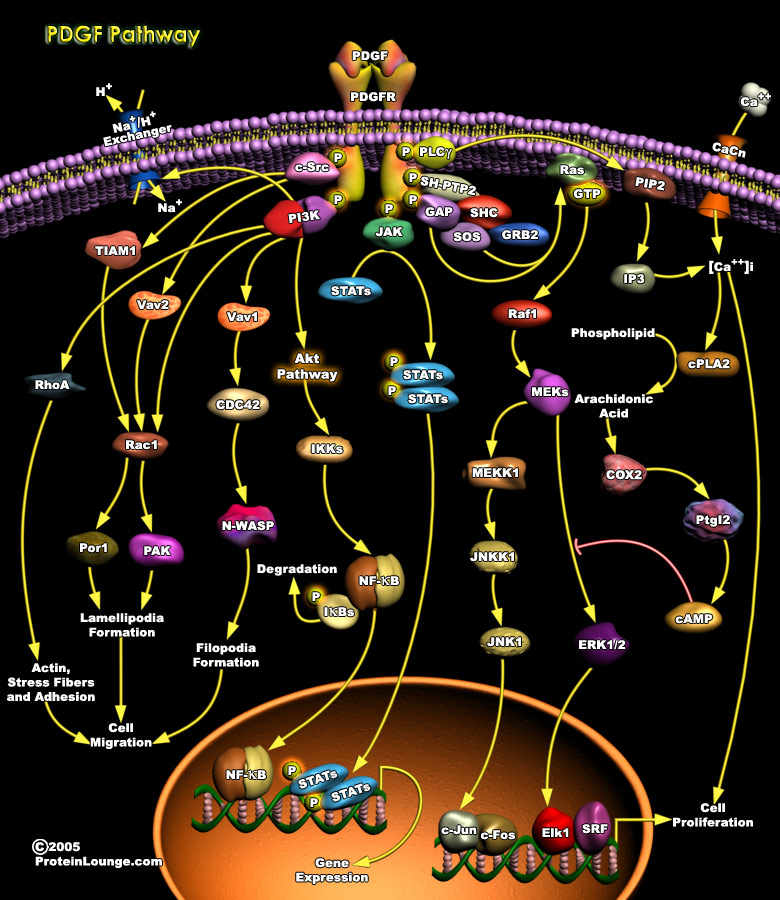 PDGF (Platelet-derived growth factor) isoforms stimulate growth, survival and motility of mesenchymal cells and certain other cell types. They have important functions during embryonal development and in the control of tissue homeostasis in the adult. Overactivity of PDGF signaling is associated with the development of certain malignant diseases, as well as non-malignant diseases characterized by excessive cell proliferation. The PDGF isoforms are synthesized as precursor molecules with signal sequences, precursor sequences and growth factor domain. After dimerization, the isoforms are proteolytically processed to their active forms which bind to the receptors. The extracellular parts of the receptors contain 5 Ig-like domains; ligand binding occurs preferentially to[..]

TGF-Beta (Transforming Growth Factor-Beta) superfamily of secreted polypeptide growth factors play an important role in a variety of pathophysiologic processes, including angiogenesis, vascular remodeling, atherogenesis and in regulating cellular responses such as growth, proliferation, differentiation, migration, adhesion, survival, and specification of developmental fate. Apart from TGF-Beta, the superfamily also includes the Activins, NODAL and the BMPs (Bone Morphogenetic Proteins). These factors signal through heteromeric complexes of Type-II and Type-I serine-threonine kinase receptors, which activate the downstream SMAD (Sma and Mad Related Family) signal transduction pathway (Ref.1, 2 & 3).Based on their structures and known functional roles, the mammalian[..]

Fas (also called Apo1 or CD95) is a death domain-containing member of the TNFR (Tumor Necrosis Factor Receptor) superfamily. It has a central role in the physiological regulation of Programmed Cell Death and has been implicated in the pathogenesis of various malignancies and diseases of the immune system. Although the FasL (Fas Ligand)-Fas system has been appreciated mainly with respect to its death-inducing function, it also transduces proliferative and activating signals through pathways that are still poorly defined. The Fas Receptor induces an apoptotic signal by binding to FasL expressed on the surface of other cells. Fas is a Type-I transmembrane protein, where as FasL a Type-II Transmembrane protein of TNF family and can be shed in a soluble form by action of[..]

STATs (Signal Transducers and Activators of Transcription) are a family of cytoplasmic proteins with SH2 (Src Homology-2) domains that act as signal messengers and transcription factors that mediate many aspects of cellular immunity, proliferation, apoptosis and differentiation. The STAT family comprises seven members namely, STAT1, STAT2, STAT3, STAT4, STAT5a, STAT5b, and STAT6. They range in size from 750 to 850 amino acids and the entire STAT family can be divided into two groups based on their functions. The first group consists of STAT2, STAT4, and STAT6, which are activated through a small number of cytokines and are involved in T-cell development and IFN-γ signaling. The second group includes STAT1, STAT3, and STAT5, which are activated in different[..]

The G12 subfamily of heterotrimeric G proteins, comprised of the Alpha-subunits G-Alpha12 and G-Alpha13, has been implicated as a signaling component in cellular processes ranging from cytoskeletal changes to cell growth and oncogenesis. Activated G-Alpha12 and G-Alpha13 have a molecular weight of 43,000 kDa and they show more than 66% amino acid identity. They stimulate mitogenic signaling pathways leading to the oncogenic transformation of fibroblast cell lines. Recent analyses have indicated that G-Alpha12 and G-Alpha13 regulate cytoplasmic as well as nuclear signaling events through downstream targets such as Ras-, Rac-, Rho-, and CDC42 (Cell Division Cycle-42) dependent pathways, leading to cytoskeletal reorganization and to the activation of MAPK[..]

In mammals, the circadian system is comprised of three major components: the lateral eyes, the hypothalamic SCN (Suprachiasmatic Nucleus) and the pineal gland. The SCN harbours the endogenous oscillator that is entrained everyday to the ambient lighting conditions via retinal input. Among the many circadian rhythms in the body that are driven by SCN output, the synthesis of Melatonin (N-Acetyl-5 Methoxy-Tryptamine) in the pineal gland functions as a hormonal message encoding for the duration of darkness. Melatonin  is a hormone secreted mainly by the pineal gland or epiphysis; it is also produced, but in much smaller quantities, by the retina. Melatonin is produced nocturnally, and is a neurochemical representation of time. Dissemination of this circadian[..]

T-Cells are a subset of lymphocytes that play a large role in the immune response. The TCR (T-Cell Receptor) is a complex of integral membrane proteins that participates in the activation of T-Cells in response to the presentation of antigen. Stimulation of TCR is triggered by MHC (Major Histocompatibility Complex) molecules on Antigen Presenting Cells that present antigen peptides to TCR complexes and induce a series of intracellular signaling cascades. Engagement of the TCR initiates positive (signal-enhancing) and negative (signal-attenuating) cascades that ultimately result in cellular proliferation, differentiation, cytokine production, and/or activation-induced cell death. These signaling cascades regulate T-Cell development, homeostasis, activation, acquisition[..]

The lymphocyte population is mainly made up of the T-lymphocytes (Thymus-Derived Lymphocytes), B-lymphocytes (bone-marrow-derived), and the NK cells (Natural-Killer Cells). T-lymphocytes mediating the cellular immunity, along with B lymphocytes mediating humoral immunity, provide adaptive immunity, which work in close collaboration with the innate immune system. B-lymphocytes mature in the bone marrow itself, while the T-lymphocytes require the thymus to mature, before being deployed to the peripheral lymphoid organs for further antigen-mediated differentiation. These cells are responsible for antibody production, direct cell-mediated killing of virus-infected and tumor cells, and regulation of the immune response (Ref.1).T cells are key mediators of the adaptive[..]

IL-1 (Interleukin-1) is a proinflammatory cytokine that stimulates a broad spectrum of immune and inflammatory responses. IL-1 is produced by activated macrophages, endothelia cells, B-Cells, and fibroblast cells. It induces inflammatory responses, edema, promotes the production of Prostaglandins, IL-2, and the growth of leukocytes (Ref.1). There are two forms of IL-1 encoded by distinct genes, IL-1 Alpha and IL-1 Beta. IL-1 Beta is produced as a 269 amino acid precursor that is cleaved by ICE (IL-1Beta Converting Enzyme) to the active IL-1 Beta form that is secreted. IL-1 induces cellular response through two subunits of its receptor, IL-1R1 (IL-1 Receptor1) and IL-1RAcP (IL-1 Receptor Accessory Protein). When it binds to its cell-surface receptor, IL-1 initiates a[..]

IL-10 (Interleukin-10) is a pleiotropic cytokine with important immunoregulatory functions whose actions influence activities of many of the cell-types in the immune system. It is a cytokine with potent anti-inflammatory properties, repressing the expression of inflammatory cytokines such as TNF-Alpha (Tumor Necrosis Factor-Alpha), IL-6 (Interleukin-6) and IL-1 (Interleukin-1) by activated macrophages (Ref.1). Functional IL-10R (IL-10 Receptor) complexes are tetramers consisting of two ligand-binding subunits (IL-10R-Alpha or IL-10R1) and two accessory signaling subunits (IL-10R-Beta or IL-10R2). Binding of IL-10 to the extracellular domain of IL-10R1 activates phosphorylation of the receptor-associated, JAK1 (Janus Kinase-1) and TYK2 (Tyrosine Kinase-2), which are[..]

To achieve strong adhesion to their neighbors and sustain stress and tension, epithelial cells develop many different specialized adhesive structures. Breakdown of these structures occurs during tumor progression with the development of a fibroblastic morphology characteristic of metastatic cells. Adhesion receptors of the Cadherin family have been implicated in these cellular processes, which play an important role in the development and maintenance of the differentiated epithelial phenotype during organogenesis and adult life. Cadherin-mediated adhesion requires the activity of the cytosolic proteins of the Rho  subfamily members, Rho, Rac and CDC42  (Cell Division Cycle-42). They belong to the Ras Superfamily of small GTPases, whose function is regulated[..]