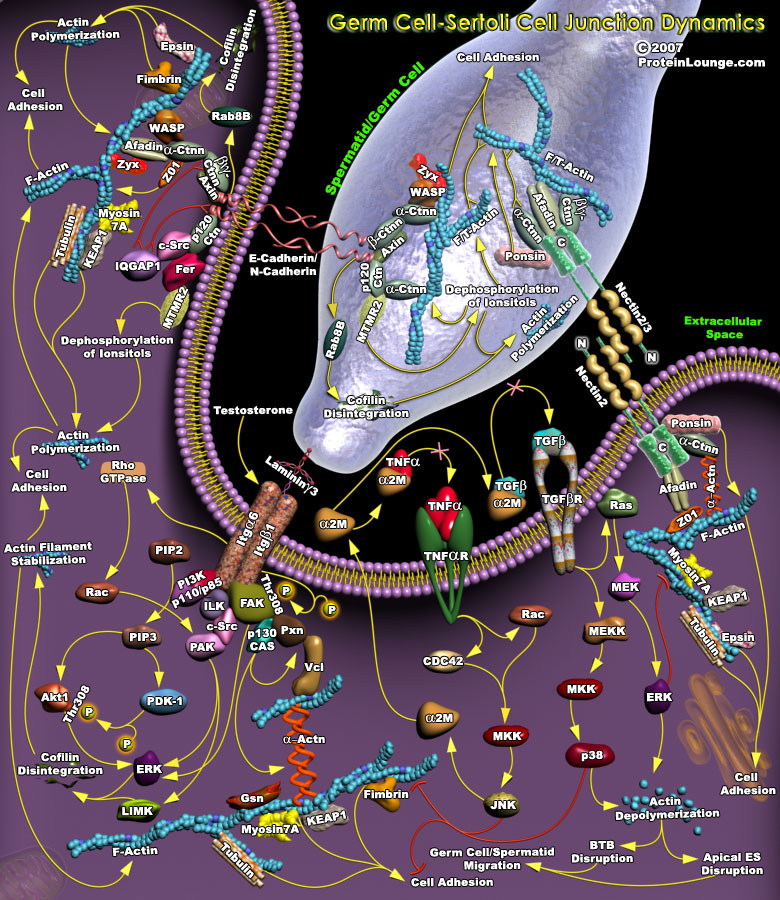 Sertoli-Germ (Spermatid)-cell interactions affect spermatogenesis at the molecular, cellular and biochemical levels. Germ cell movement within the epithelium is vital because germ cells, if induced to release into the tubule lumen prematurely, will be unable to fertilize the ovum. On the other hand, if germ cells are forced to remain attached to the seminiferous epithelium for a period of time longer than necessary to complete their development, they will degenerate and eventually be phagocytosed by Sertoli cells and for this, proper regulation of germ cell migration in the seminiferous epithelium and at blood-testes barrier (abbreviated as BTB) is essential (Ref.1). Spermatid/germ cell and sertoli cell interactions in the testis occur through specialized junctions[..]

Colorectal tumors arise as a result of the mutational activation of oncogenes coupled with the mutational inactivation of tumor suppressor genes without a major role for gene amplification or rearrangement. These tumors affect the colon and rectum, and most colorectal cancers arise from adenomatous polyps. The development of colorectal neoplasms is characterized by an ordered series of events that are referred to as the “Dysplasia-Carcinoma Sequence” or “Adenoma-Carcinoma Sequence”. Mutations in at least four to five genes are required for the formation of malignant tumors and fewer changes only suffice for benign tumorigenesis. Although genetic alterations occur according to a preferred sequence, the total accumulation of changes, rather than[..]

Tumors of the Central Nervous System (CNS) are devastating as they are difficult to treat and may cause grave disability or death. CNS Gliomas pose particularly difficult problems because of their tendency toward malignancy, rate of tumor spread, and the lack of effective therapy. Gliomas are the most common intracranial malignant tumors in humans (Ref.1). In vertebrates, the embryonic neural tube (neuroectoderm) gives rise to the main cell types of the CNS, including neurons, astrocytes, oligodendrocytes and ependymal cells. The neural crest derives from the dorsal lip of the neural tube, and its cells migrate extensively during embryonic development, giving rise to various tissues, including the Peripheral Nervous System (PNS). In both the CNS and PNS, the appearance[..]

In humans, roughly 300 million spermatozoa on average are ejaculated in the female reproductive tract, but only about one of every million actually enters the Fallopian tube. Upon entry, these spermatozoa apparently bind strongly to the oviductal epithelium in the isthmus, forming a sperm storage site.  Human spermatozoon formed in the testes via spermatogenesis is morphologically complete but functionally immature and incapable of fertilizing an egg. Spermatozoa to become fertile must undergo maturation in the epididymis followed by capacitation, and acrosome reaction in the female reproductive system. For reaching the oocyte at the fertilization site, the limited number of capacitated spermatozoa in the isthmus has to swim a long way full of obstacles. This[..]

Teeth develop as ectodermal appendages in vertebrate embryos, and their early development resembles morphologically as well as molecularly other organs such as Hairs and Glands. Interactions between the Ectoderm and underlying Mesenchyme constitute a central mechanism regulating the morphogenesis of all these organs. Central features of Tooth morphogenesis are the formation of the Epithelial Placode, the budding of the Epithelium, the condensation of Mesenchyme around the bud, and the folding and growth of the Epithelium generating the shape of the Tooth Crown. The mineralized structures characteristic for Teeth, which is, Dentin and Enamel, are formed by specialized cells, the Odontoblasts and Ameloblasts differentiating from the Mesenchyme and Epithelium,[..]

The cell membranes do not simply serve as barriers to separate the inside of the cell from the outside or to delineate different intracellular compartments. These membranes also serve as a platform for cell signaling by allowing specific sets of proteins to interact. Phospholipids are major structural constituents of the cell membranes. In the cell membranes of neurons, the two most prevalent Phospholipids include PC (Phosphatidylcholine) and PS (Phosphatidylserine). When cell membranes are stimulated by cell signaling activity, enzymes (called Phospholipases) free lipid messengers from these reservoirs. The lipid messengers then regulate and interact with other signaling cascades to contribute to the development, differentiation, function protection, and repair of the[..]

Cellular Lipid homeostasis in mammalian cells is regulated through the end-product feedback regulation of Lipid synthesis by a family of membrane-bound transcription factors designated SREBPs (Sterol Regulatory Element–Binding Proteins) that control the flux of cellular metabolites into the major Lipid pathways. The mammalian cell continuously adjusts its Sterol content by regulating levels of key Sterol synthetic enzymes and levels of Lipoprotein receptors that mediate uptake of Cholesterol-laden particles. Control is brought about by SREBPs, which monitor the Sterol-regulated transcription and directly activate the expression of more than 30 relevant genes dedicated to the synthesis and uptake of Cholesterol, Fatty Acids, Triglycerides, and Phospholipids, as well[..] 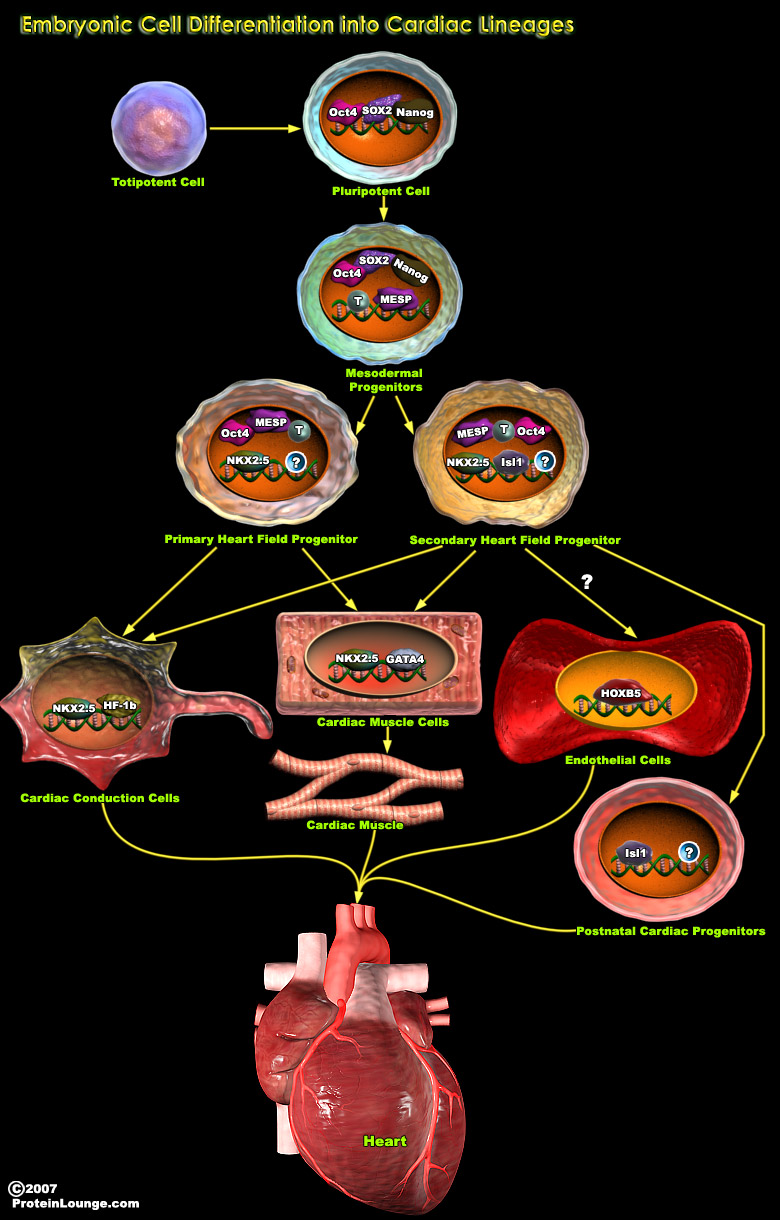 MI(Myocardial infarction ) causes the loss of cardiac tissue and scar formation, which ultimately lead to heart failure. According to the World Health Organization, heart failure initiated by MI and coronary artery disease accounts for 29% of deaths worldwide. However, human heart tissue does not regenerate spontaneously, thus “regenerative medicine” represents a promising alternative treatment for MI. Cardiac tissue regenerative medicine involves cardiomyocyte regeneration, neovascularization, and paracrine cytokines, which have anti-inflammatory, anti-apoptotic, and anti-remodeling effects. During the last decade, stem cells have become promising candidates for regenerative medicine not only because of their capacity of differentiation toward[..]

ESCs (Embryonic Stem Cells) are Pluripotent cells capable of differentiating into any cell type of the body. Only three species of Mammals have yielded long-term cultures of self-renewing ESCs- Mice, Monkeys, and Humans. Human ESCs are derived from Blastocysts, multicellular structures originating from four cleavages of fertilized oocytes. Isolated from the ICM (Inner Cell Mass) of Blastocysts, the ESCs retain properties of self-renewal and the potential to be committed and to differentiate toward most cell lineages. They are able to spontaneously give rise to different progenies of the three embryonic layers, namely, the Ectoderm, the Mesoderm and the Endoderm. The Pluripotency of ESCs has attracted great attention for their potential use in tissue and cell therapy.[..]

ESCs (Embryonic Stem Cells) are a population of Pluripotent, Self-renewing cells which can proliferate indefinitely and contribute to the formation of basically all cell types in vitro and in vivo. The study of mammalian ESCs, especially Mouse ESCs, has provided valuable insights into early embryogenesis in mammals. Mouse ES cells are derived mainly from the ICM (Inner Cell Mass) of the Mouse Blastocyst embryos and retain this developmental identity even after prolonged culture in vitro. Both cell Extrinsic and Intrinsic factors regulate Mouse ESC Self-renewal and Pluripotency. Cell extrinsic factors include LIF (Leukaemia Inhibitory Factor) and BMP (Bone Morphogenic Protein), which signal through STAT (Signal Transducer and Activator of Transcription) and SMAD (Sma[..]

ESCs (Embryonic stem cells) are Pluripotent cells derived from the ICM (Inner Cell Mass) of Blastocyst-stage embryos. These cells have two distinctive properties: an unlimited capacity for Self-renewal and Pluripotency. The capability for Self-renewal and the Pluripotency of ESCs seem to be under the control of multiple transcriptional factors, most common among them being Nanog (Nanog homeobox), Oct4 (Octamer Binding Transcription Factor-4) and SOX2 (SRY (Sex Determining Region-Y) Box-2). Functions of these transcription factors depend on the stage of development of a Pluripotent cell, indicating that these factors function in combination with other processes. The activity of these transcription factors also depends on the accessibility[..]

Stem cells are undifferentiated cells capable of producing virtually all cell types in our body. They are characterized by the ability to Self-renew and maintain Pluripotency. For proper developmental outcome, ESCs (Embryonic Stem Cells) must tightly regulate their differentiation status. Hundreds of genes have been identified, including several transcription factors, which have expression patterns tightly correlated with  ESC  differentiation. Very low number of transcription factors is responsible for regulating the development of an entire organism. These transcription factors form multiprotein complexes on DNA, thereby orchestrating the correct temporal–spatial expression of developmental genes. The process leads to the establishment of functional[..]