Retinoic Acid, the active form of Vitamin-A (all-trans-Retinol), is a lipophilic molecule, and is known to affect gene transcription. Retinoic Acid is made available in the body through dietary intake and subsequent metabolism in the liver. Vitamin-A is secreted from its storage pools and circulates in blood. In the liver Vitamin-A is converted to all-trans-Retinoic acid, the Carboxylic Acid form of Vitamin-A and diffuses easily to the target tissues through cellular membranes; gets bound to CRABP (Cellular Retinoic Acid Binding Protein) and produces its biological effects through the activation of RARs (Retinoic Acid Receptors). Although biologically active ligands for the RARs also include 9-cis-Retinoic Acid among others, yet circulating levels of 9-cis-Retinoic[..]

Vitamin-A (all-trans-Retinol), one of the essential micronutrient in the human is obtained chiefly in form of Retinyl Esters from meat, and Carotenoids, such as Beta-Carotene, from plant tissue. Beta-carotene and other Carotenoids are converted by the body into Retinol and are referred to as Provitamin-A Carotenoids. Hundreds of different Carotenoids are synthesized by plants, but only about 10 percent of them are Provitamin-A Carotenoids (Ref.1). The main site for synthesis and storage of Vitamin-A is in the liver. The pRBPs (Plasma Retinol-Binding Proteins) and Ttr (Transthyretin) facilitate the transfer of insoluble Vitamin-A between tissues, principally from storage sites in the liver to peripheral tissues. In the absence of pRBPs and Ttr the supply of Vitamin-A to[..]

Microorganisms have developed several mechanisms to survive in their hosts' environments. These include competition with their hosts for metal acquisition and resistance to host defenses such as NO (Nitric Oxide), a cytotoxic weapon generated by macrophages. In eukaryotic cells, NO is metabolically produced by NOS (NO Synthase) from L-Arginine, O2 (Molecular Oxygen), and NADPH (Nicotinamide Adenine Dinucleotide, Reduced). In macrophages, an inducible NO synthase (iNOS or NOS2) is produced after activation by endotoxins or cytokines and generates copious amounts of NO presumably to help kill or inhibit the growth of invading microorganisms or neoplastic tissue. Although iNOS was originally identified and characterized in macrophages, it is present in numerous cell[..] 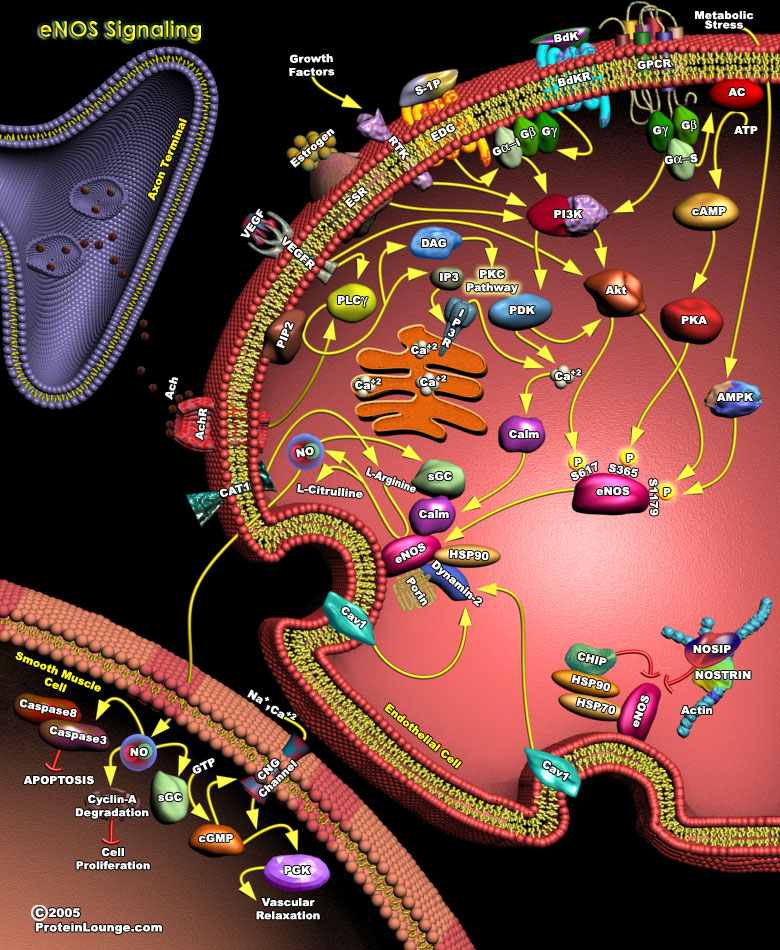 NO (Nitric Oxide) is a short-lived free radical gas involved in diverse physiological and pathological processes. It is produced along with L-Citrulline by the oxidation of L-Arginine and catalyzed by three different isoforms of NOS (NO Synthase). Type-I nNOS (neuronal NOS) and Type-III eNOS (endothelial NOS) are constitutively expressed as latent enzymes and require a higher concentration of Ca2+ for the enzyme activity. In contrast, Type-II iNOS (inducible NOS) is Ca2+ independent because it’s high affinity for Ca2+/Calm (Calmodulin) renders the enzyme active even at basal levels of intracellular Ca2+ . The catalysis of this reaction requires a number of essential cofactors such as mononucleotide, FAD (Flavin Adenine Dinucleotide), and NADPH (Nicotinamide Adenine[..]

Simple eukaryotes such as yeasts and molds encode multiple PAKs (p21-Activated Kinases) that, like their orthologs in other systems, act downstream of Rho-family GTPases. All PAKs contain an N-terminal PBD (p21 GTPase-Binding-Domain), which confers binding to small GTPases such as CDC42 (Cell Division Cycle-42) or Rac, and a C-terminal protein kinase domain, but they do not bind to Rho, Ras, or other small G-proteins. CDC42 and Rac bind in a GTP-dependent fashion to a highly conserved sequence, referred to as the CRIB (CDC42 and Rac Interactive Binding) domain, found in the N-terminal regulatory domains of all characterized PAKs (Ref.1).The fission yeast Schizosaccharomyces pombe encodes two PAK kinases–Pak1/Shk1 and Pak2/Shk2–both of which, like their[..]

As an axon grows, the growth cone at its advancing edge encounters specific ‘choice points’ at which guidance cues steer specific axons towards their appropriate destinations. Such cues may attract a subset of axons towards a given domain, repel axons from inappropriate target regions or simply provide a permissive substrate for axonal outgrowth. There are many different ways in which a guidance signal might intervene to steer the growth cone. For example, a guidance cue might promote the initiation, extension, stabilization, or retraction of individual filopodia, or the capture or stabilization of microtubules in specific regions of the growth cone. In each of these cases, guidance signals must be relayed through the growth cone to the actin cytoskeleton,[..]

Tuberculosis (TB) is the leading bacterial cause of death worldwide. The causative agent for causing TB is Mycobacterium tuberculosis which is responsible for causing 8.8 million new cases of active disease and 1.6 million deaths per year.  The first step in TB infection takes place with the internalization of the bacilli by alveolar macrophage followed by inhalation of droplets. Macrophages are phagocytic cells and acts as the first line of defense against microbial invasion. Since macrophages in the alveoli are the first cells to be exposed to the Mycobacterium they get infected first. Activation of macrophages leads to the production of several antimicrobial molecules involved in combating intracellular mycobacterial infection including ROS and[..]

Brassinolide Biosynthesis in A. thaliana

BRs (Brassinosteroids) are Plant Steroid Hormones that influence a wide range of important Developmental and Physiological processes, including Regulation of Gene Expression, Cell Division and Expansion, Differentiation, Programmed Cell Death, and Homeostasis. The regulation of these processes by BRs, acting together with other plant hormones, leads to the promotion of Stem Elongation and Pollen tube Growth, Leaf Bending and Epinasty, Root Growth Inhibition, Proton-Pump Activation, and Xylem Differentiation. The pathways of BR biosynthesis have been elucidated by a series of detailed biochemical studies. The biosynthetic pathway to BL (Brassinolide), the biologically most active BR, can be divided into General Sterol Synthesis (Cycloartenol to Campesterol), and the[..]

Plant growth and development are ruled by environmental and endogenous signals, which are integrated through genetic networks that finally act on the division, expansion, and differentiation of cells to generate specific developmental patterns. BRs (Brassinosteroids) are steroid hormones belonging to the group of endogenous signals required for plant growth and organogenesis, controlling processes such as Cell Expansion, Vascular Differentiation, Etiolation and Reproductive Development. In addition to a role in Plant growth and development, BR has been also implicated in the modulation of Plant Stress Responses, including Enhancement of Chilling, Thermo, Salt-tolerance and Protection of Plant from the Mild Drought Injury and Pathogen Attack. Plants those are[..]

Phagocytosis, defined as the cellular uptake of particulates (>0.5 m) within a plasma-membrane envelope, is closely related to and partly overlaps the endocytosis of soluble ligands by fluid-phase macropinocytic and receptor pathways. The uptake of exogenous particles (heterophagy) has features in common with autophagy, an endogenous process of sequestration and lysosomal disposal of damaged intracellular organelles. There is a spectrum of uptake mechanisms depending on the particle size, multiplicity of receptor-ligand interactions, and involvement of the cytoskeleton. Once internalized, the phagosome vacuole can fuse selectively with primary lysosomes or the product of the endoplasmic reticulum (ER) and Golgi complex, to form a secondary phagolysosome. This pathway[..]