Inhibition of Ribosome Biogenesis by P14ARF

p14(ARF) is a key component of a major human tumor suppressor pathway that is responsible for arresting cell-cycle progression and inducing cell death in response to DNA damage and oncogenic stress. It plays an important role as an inhibitor of the MDM2-mediated degradation of p53. p14(ARF) activity is linked to its oligomerization and is sensitive to the redox status of the cell. Oxidative stress affects p14(ARF) oligomerization. Tumor promotion is associated with an altered redox status, and it is known that cancer cells produce an excess of ROS (Reactive Oxygen Species). The oligomeric forms of p14(ARF) are sensitive to reducing agents. p14(ARF) binds to MDM2 and promotes its rapid degradation. This interaction is mediated by the Exon1Beta-encoded N-terminal domain[..]

Caspases are a family of evolutionary conserved cysteine dependent aspartate-specific proteases that play crucial roles in maintaining organismal homoeostasis throughout life.Mammalian caspases are broadly classified as being inflammatory/pyroptotic (human caspase-1, 4, 5 and 12, murine caspase-1, 11 and 12), or as initiators (human and murine caspase-2, 8, 9 and human caspase-10) and executioners (human and murine caspase-3, 6 and 7) of apoptotic cell death.The culmination of this cascade is the cleavage of a number of proteins in the cell, followed by cell disassembly, cell death, and, ultimately, the phagocytosis and removal of the cell debris. The Caspase cascade is activated by two distinct routes: one from cell surface and the other from mitochondria (Ref.1). The[..]

Chemokines are a group of small, secreted molecules that signal through G protein-coupled receptors to promote cell survival and proliferation and to provide directional guidance to migrating cells. Initially chemokines were divided into groups based on having chemotactic or homeostatic function, but several dual-function chemokines have since been described. To date, 44 chemokines and 23 chemokine receptors have been identified in the human genome. It is the expression of particular chemokines, receptors, and adhesion molecules that contribute to the selective migration and tissue specificity of leukocytes. Chemokines can be subdivided into four families based on the positioning of the N-terminal cysteine residues (Ref.1 & 2).Chemokines mediate their effects[..]

The Chemokine receptor CXCR4 is a 352 amino acid rhodopsin-like GPCR and selectively binds the CXC chemokine Stromal Cell-Derived Factor 1 (SDF1) also known as CXCL12. Classically, two alternatively spliced isoforms of SDF have been identified. SDF1Alpha is an 89 amino acid protein that is the predominantly expressed form of SDF1 while SDF1Beta contains a four amino acid extension at the carboxyl terminus. Recently, an additional four splice variants that contain 30 (SDF1Gamma), 31 (SDF1Delta), 1 (SDF1Epsilon), and 51 (SDF1phi) amino acid extensions at the carboxyl terminus compared to SDF1Alpha have been identified (Ref.1).CXCL12 is the sole ligand for the chemokine receptor CXCR4.This receptor has been described as undergoing dimerization after binding to CXCL12 or[..]

Adhesive interactions between cells and ECM (Extracellular Matrix) proteins play a vital role in biological processes, including cell survival, growth, differentiation, migration, inflammatory responses, platelet aggregation, tissue repair and tumor invasion and perturbing this coordination can lead to events such as malignant transformation. The major groups of proteins mediating these interactions are a family of cell surface receptors known as Integrins, named for their role in integrating the intracellular cytoskeleton with the ECM (Ref.4). The signals from these adhesion receptors are integrated with those originating from growth factor receptors in order to organize the cytoskeleton, stimulate cell proliferation and rescue cells from matrix detachment and[..]

Apoptosis is a cell suicide mechanism that enables metazoans to control cell number in tissues and to eliminate individual cells that threaten the animal's survival. Certain cells have unique sensors, termed DR (Death Receptors), on their surface, which detect the presence of extracellular death signals and, in response; they rapidly ignite the cell's intrinsic apoptosis machinery. Death Receptors belong to the TNF (Tumour Necrosis Factor) gene superfamily and generally can have several functions other than initiating apoptosis. Eight members of the Death Receptor family have been characterized so far: TNFR1 (Tumor Necrosis Factor Receptor-1) also known as DR1, CD120a, p55 and p60, Fas (also known as DR2, APO1 and CD95), DR3 (Death Receptor-3) (also known as APO-3,[..] 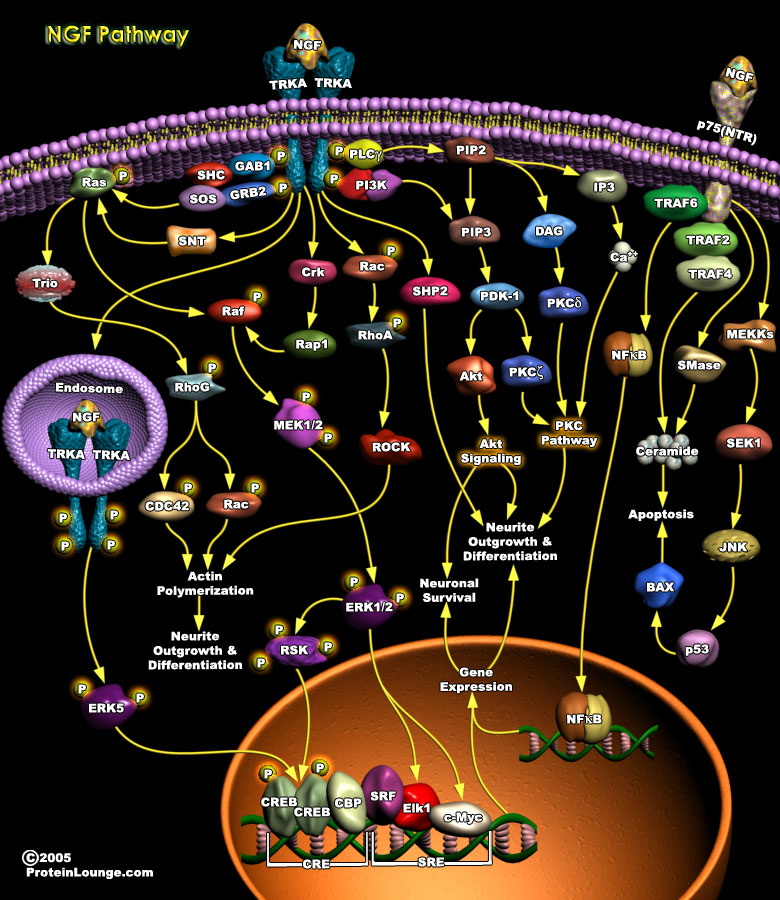 One of the most fundamental issues in current biology is how to maintain the critical balance between cell survival and death, both during development and in adulthood. Unrestrained cell division and survival leads to various forms of tumor, while excessive or premature cell death may lead to a variety of diseases such as Alzheimer's, Parkinson's and Multiple Sclerosis. In the nervous system, a family of Neurotrophins, which includes NGF (Nerve Growth Factor), BDNF (Brain Derived Neurotrophic Factor), NT3 (Neurotrophin3) and NT4/5 (Neurotrophin-4/5), maintains this critical balance of cell survival and death. The best characterized of these is the NGF, a neurotrophic protein which is important for the growth and survival of diverse peripheral and central[..]

Angiogenesis, the growth of new blood vessels, plays a key role in many physiological and pathological processes, such as ovulation, embryogenesis, wound repair, inflammation, malignant tumor growth, retinopathies, rheumatoid arthritis, and angiogenesis-dependent diseases. One of the best-characterized modulators of angiogenesis is the heparin-binding FGF (Fibroblast Growth Factor) (Ref. 1).FGFs are a large family of multifunctional peptide growth factors of which there are at least 28 distinct members. The members of this peptide growth factor family have been identified in a variety of organisms and play pivotal roles in many cellular processes including mitogenesis, differentiation, migration, and cell survival During embryonic development, FGFs play a critical role[..]

The Notch signaling pathway is a fundamental signaling system used by neighboring cells to communicate with each other in order to assume their proper developmental role. Notch proteins are cell surface transmembrane-spanning receptors which mediate critically important cellular functions through direct cell-cell contact. Interaction between Notch and its proposed ligands initiates a signaling cascade that governs cell fate decisions such as differentiation, proliferation, and apoptosis in numerous tissue types. The core elements of the Notch signaling system include the Notch receptor, DSL ligands (Delta and Serrate/Jagged in Drosophila and vertebrates, Lag2 in Caenorhabditis elegans) and CSL DNA-binding proteins (CBF1/RBPJ-kappa in vertebrates, Su(H) [Suppressor of[..]

Bone remodeling and homeostasis is an essential function that regulates skeletal integrity throughout adult life in higher vertebrates and mammals. The structural and metabolic integrity of bone is maintained through the dynamic process of bone remodeling that results from the coordinate action of bone resorption by osteoclasts and the formation of new bone by osteoblasts. Regulation of bone remodeling occurs through multiple mechanisms that ultimately converge on the interaction of osteoclasts or their precursors with osteoblasts and bone marrow stromal cells. Key factors supplied by the stromal environment are cytokines such as IL1, IL11, IL17, CSF1 (Colony Stimulating Factor-1) and the TNF receptor ligand family, RANKL (Receptor Activator of NF-kappaB Ligand; also[..]