The DNA damage response network involves several kinases to inactivate CDK/ cyclin complexes and result in cell cycle arrest for DNA repair. In the presence of DNA damage or incomplete DNA replication, eukaryotic cells activate cell cycle checkpoints that temporarily halt the cell cycle to permit DNA repair or completion of DNA replication to take place. In the presence of extensive damage or absence of timely repair, these checkpoint-signaling pathways may also trigger a pathway that effects programmed cell death or apoptosis. DNA damage-activated cell cycle checkpoints are regulated in part by the phosphoinositide kinase family of checkpoint components, including the yeast Rad3 in Schizosaccharomyces pombe, Mec1/Tel1 in Saccharomyces cerevisiae, mammalian ATM (Ataxia[..]

Inositol lipid-specific PLC (Phospholipase-C) isozymes are key signaling proteins in the cellular action of many hormones, neurotransmitters, growth factors, and other extracellular stimuli. PLC are soluble proteins that are partly cytosolic and partly associated with membrane. The PLC family in human is comprised of 13 subtypes. On the basis of their structure, they have been divided into six classes, PLC-Beta (Beta 1, 2, 3 and 4), PLC-Gamma (Gamma 1 and 2), PLC-Delta (Delta 1, 3 and 4), PLC-Epsilon, PLC-Zeta and PLC-Eta (Eta1 and 2) types. The molecular weights of each are 85kDa for the Delta form, 120-155kDa for both the Beta and Gamma forms, and 230-260kDa for the Epsilon form. These groups also differ in the mechanisms by which the isozymes are activated in[..] 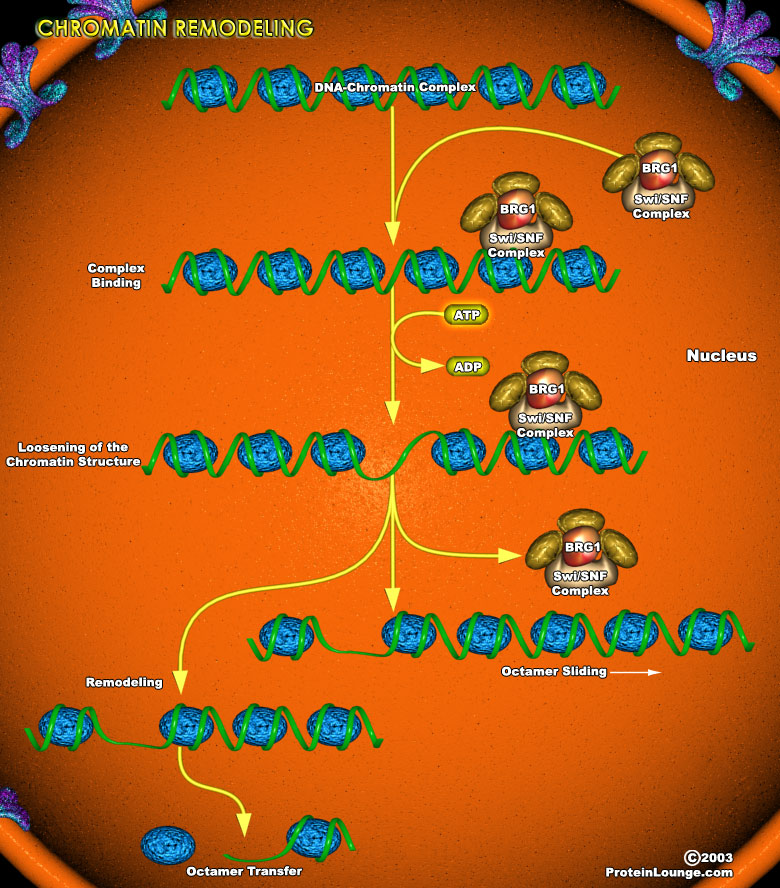 The condensation of DNA into an ordered chromatin structure allows the cell to solve the topological problems associated with storing huge molecules of chromosomal DNA within the nucleus. DNA is packaged into chromatin in orderly repeating protein-DNA complexes called nucleosomes. Each nucleosome consists of approximately 146bp of dsDNA (double-stranded DNA) wound 1.8 times around a histone octamer.Two molecules each of H2A, H2B, H3, and H4 comprise the histone ramp around which the DNA superhelix winds. Stretches of DNA upto 100bp separate adjacent nucleosomes. Multiple nuclear proteins bind to this linker region, some of which may be responsible for the ordered wrapping of strings of nucleosomes into higher-order chromatin structures (Ref.1).Chromatin assembly[..]

Nucleotide excision repair (NER) is the main pathway used by mammals to remove bulky DNA lesions such as those formed by UV light, environmental mutagens, and some cancer chemotherapeutic adducts from DNA. Deficiencies in NER are associated with the extremely skin cancer-prone inherited disorder xeroderma pigmentosum. Although the core NER reaction and the factors that execute it have been known for some years, recent studies have led to a much more detailed understanding of the NER mechanism, how NER operates in the context of chromatin, and how it is connected to other cellular processes such as DNA damage signaling and transcription(Ref.1). The NER process requires the action of more than 30 proteins in a stepwise manner that includes damage recognition, local[..]

The optimum functioning of the immune system is crucial for human survival. The invading pathogens are encountered by the cells of the immune system, which include T-Cells, B-Cells, macrophages, neutrophils, basophils, eosinophils, endothelial cells, or mast cells. These cells have distinct roles in the immune system, and cell-to-cell communication among these cells is an indispensable prerequisite for the stimulation of the optimum immune response. In the process, cytokines serve as signal molecules for communication that are induced by several cell-signaling cascades. NFATs (Nuclear factors of activated T-Cells), a family of transcription factors expressed by diverse cell types of the immune system plays a pivotal role in the process. Originally described in[..]

Angiogenesis plays an important role in pathological events such as tumor growth, wound healing, psoriasis, and the ischemic retinopathies that occur in diabetes and sickle cell disease. The main modulators of the angiogenesis process in adults, is achieved through signaling by peptide growth factors, however, recent researches also emphasize the contribution of purines and pyrimidines to this process. Synergistic actions of purines and pyrimidines with growth factors aid in promoting cell proliferation (Ref.1). ATP (Adenosine Triphosphate), ADP (Adenosine Diphosphate), UTP (Uridine Triphosphate), UDP (Uridine Diphosphate) and adenosine play pivotal signaling roles in these long-term events, referred to as purinergic signaling, mediated via P1 and P2 receptors.[..]

DNA double-strand breaks (DSBs) are serious lesions that threaten a loss of chromosomal content. Repair of DSBs is particularly challenging because, unlike all other lesions, the DNA substrate is inherently bimolecular. Bringing two DNA molecules together is also dangerous because local mutations and chromosome rearrangements can arise if ends are inappropriately coupled. The cell has two general strategies for repairing DSBs i.e. HR (Homologous recombination) and NHEJ (Non-homologous end joining). HR is a mechanism in which an intact homologous donor duplex is used to guide DNA synthesis across the DSB gap whereas NHEJ is defined as repair in which two DSB ends are joined by direct ligation. The resulting joints are characterized by little (less than ~10 bp) or no[..]

DNA methylation is one of the best characterized epigenetic modifications. In mammals it is involved in various biological processes including the silencing of transposable elements, regulation of gene expression, genomic imprinting, and X-chromosome inactivation.DNA methylation of gene promoter regions is associated with transcription repression.Transcriptional repression is an essential mechanism in the precise control of gene expression. Transcriptional repressor proteins associate with their target genes either directly through a DNA-binding domain or indirectly by interacting with other DNA-bound proteins. To inhibit transcription in a selective manner, a repressor protein can mask a transcriptional activation domain, block interaction of an activator with other[..]

Genotoxic stress is an important and ubiquitous type of stress that cells are inevitably exposed to over the life span of an organism. Many potentially damaging agents both from the environment and from endogenous processes involving activated oxygen species and other reactive agents can damage the DNA in cells (Ref.1). GADD45 induction by BRCA1 leads to programmed cell death through the JNK pathway via interaction with the upstream kinase MTK1/MEKK4. JNK has been shown to be involved in the induction of apoptosis after genotoxic stress and UV radiation. However, JNK and p38 may exert antagonistic effects depending on cell context, cross-talk with other signaling pathways and intensity and duration of the stimulus. Originally, JNK activation and inhibition experiments[..]

Cellular DNA is constantly exposed to the effects of endogenous or environmental agents such as free radicals, radiation and chemicals. In higher organisms, these nucleic alterations are estimated at several thousands of lesions per cell which can correspond to the loss of bases and also to the breaking of one or both strands of the DNA double helix. Among these DNA breaks, the DSB(double-strand break) is the most harmful because it is the most difficult to repair. DSBs are the most genotoxic DNA lesions.Unrepaired DSBs can lead to cell death, whereas misrepaired DSBs increase the likelihood of chromosome rearrangement, mutagenesis and loss of crucial genetic information. In replicating cells, such instability can result in apoptosis or cellular transformation. In[..]

The major DNA Repair mechanisms take advantage of the facts that DNA is double-stranded and the same information is present in both strands. Consequently, in cases where damage is present in just one strand, the damage can be accurately repaired by cutting it out (excision) and replacing it with new DNA synthesized using the complementary strand as template. All organisms, prokaryotic and eukaryotic, employ at least three excision mechanisms: Mismatch Repair, Base Excision Repair, And Nucleotide Excision Repair. Mismatch repair successfully meets a number of challenges. First, it recognizes a wide spectrum of rare mismatches, embedded in millions of correctly base-pairing nucleotides. Second, mismatch repair unequivocally discriminates between a correct nucleotide in[..]