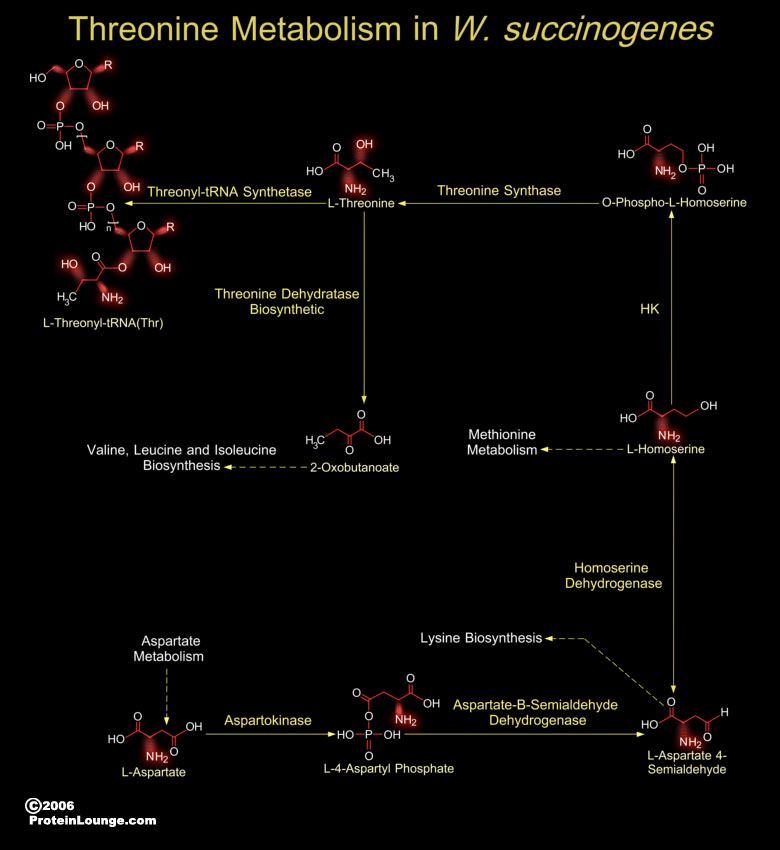 W. succinogenes (Wolinella succinogenes) is a non-fermenting bacterium that grows anaerobically. It is rod-shaped bacteria with monotrichous flagellation and the insertion of the flagellar motor is into the pole of the cell. W. succinogenes resides in the bovine rumen, the human gingival sulcus, and dental root canal infections. W. succinogenes, is closely[..]

Glycine, Serine and Threonine Metabolism in A. gossypii

The yeast A. gossypii (Ashbya gossypii), also known as E. gossypii (Eremothecium gossypii), is a free-living hemiascomycete that utililizes amino acid metabolisms to obtain its nitrogen source. For such reason the metabolism of Glycine, Serine and Threonine is essential for the survival of A. gossypii. Yeast physiology can be either obligately[..]

Y. pestis (Yersinia pestis), the Gram-negative Coccobacillus belonging to the Enterobacteriaceae is the causative agent of Plague and is arguably the deadliest pathogen in history. It is one of several agents likely to be used as a biological weapon in a bioterrorism event. Yersinia sp. is responsible for disease syndromes ranging from Gastroenteritis to Plague.[..]

Like many bacteria, yeast species can form biofilms on several surfaces. C. albicans (Candida albicans) colonizes in the surfaces of catheters, prostheses, and epithelia, forming biofilms that are extremely resistant to anti-fungal drugs. The protein Gcn4 (Transcriptional Activator Gcn4), a regulator of amino acid metabolism, is required for normal biofilm growth. The[..]

S. cerevisiae (Saccharomyces cerevisiae) are single-celled fungi which multiply by budding or in some cases by division (fission). Yeast fermentations comprise the oldest and largest application of microbial technology. Yeast physiology can be either obligately aerobic or facultatively fermentative. There is no known obligately anaerobic yeast. In pharmacy and chemistry, a[..]

Y. pestis (Yersinia pestis) is rod shaped, Gram-negative, and non-motile but has two distinct flagellar gene clusters; one set is incomplete and the other produces a truncated protein, which acts as a transcriptional activator for the flagellar genes. Y. pestis, a Group-A bioterrorism agent, causes Plague, a re-emerging zoonotic disease transmitted to humans through[..]

The metabolism of Glycine, Serine and Threonine is essential for the unicellular eukaryote S. pombe (Schizosaccharomyces pombe), as it uses L-Serine or L-Threonine as sole nitrogen source for its survival. During the metabolism of these amino acids, L-Threonine is generally synthesized from Pyruvate and L-Aspartate. The enzyme Threonine Ammonia Lyase/Threonine Dehydratase[..]

The hair follicle is a three-dimensional tube, composed mainly of epithelial cells that protrude down through the epidermis and dermis of the skin, enveloping at its base the mesenchyme-derived dermal papilla. These hair follicle acts as a sensory organ and immunologic sentinel for the skin. Hairs detect mechanical stimuli above the surface of the skin, and the slightest bend in a hair activates[..]

Hepatitis-C Virus (HCV) belongs to the Flaviviridae family and is the leading cause of chronic liver disease globally. It is estimated to infect about 170 million people around the world (WHO, 1997). Chronic HCV infection frequently leads to liver fibrosis and cirrhosis, and is associated with the occurrence of hepatocellular carcinoma. Acute infection occurs in only a few patients. In most cases[..]

The CD1 (Thymocyte Antigen CD1) antigen presentation system presents lipid and glycolipid antigens to effector T-Cells, which have diverse roles in Antimicrobial responses, Antitumor immunity and in regulating the balance between Tolerance and Autoimmunity. CD1, a conserved family of MHC (Major Histocompatibility Complex)-like glycoproteins in mammals, specializes in capturing lipid rather[..]

Steroid Biosynthesis in A[...]